There are many products that use textile in a good measure. One of such textile products is the umbrella. An umbrella can be simply defined as a canopy for protection against rain, snow or sunlight.

The term umbrella has been derived from the Latin word umbra which means “shade”. Umbrellas are generally hand-held portable devices rendering fashion statement in some societies and used as an accessory in some other societies.

However, some of these can be big enough that can be fixed to patio tables or other outdoor furniture. They are the ‘Parasols’, the term which is synonymously used for umbrellas as well. Parasols can be bigger as well as smaller but they are primarily meant for protection only against the sun. 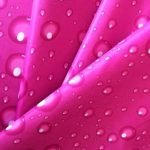 Fabric Selection for Umbrellas
Historically speaking, a variety of fabrics had been used for making umbrellas that included linen, cotton, leather, taffeta variety of silk, lace and the special fabric that was first made for umbrellas only- the Gloria.

Gloria which means ‘ bright’, is a plain weave of silk and wool, and silk and cotton. After that, rayon and acetate were widely used for making umbrellas. Nowadays, the fabric generally used is nylon taffeta with an acrylic coating on the underside and a scotch-guard type finish on the top.

Most recently, microfiber fabrics with new water repellent finishes are also being used by the umbrella manufacturers

When using nylon taffeta, the fabric’s coating and finish are generally done by the fabric suppliers. It’s the prerogative of the umbrella manufacturers to select the fabric patterns and designs.

These umbrella manufacturers can even add their own patterns and designs with the help of rotary or silk screening processes which is cost-effective only for a special order of a limited number of umbrellas.

The Making of Umbrella
Umbrella manufacturing is basically a hand-assembly process where various parts are joined to each other in a methodical manner. Apart from the canopy made of fabric, the other parts of the umbrella are Shaft, Ribs, Stretchers, Runner, and Handle. They can be made of wood, metal, plastic or any other such material. 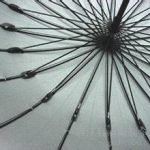 Shaft
It is usually made of wood, steel, or aluminum. Sometimes Fiberglass and other plastics are used, which can commonly be seen in the larger golf umbrellas. When consisting of wood, shafts are made with the help of wood-shaping machines such as turning machines and lathes. Metal and plastic shafts are drawn or extruded for giving them the required shape. 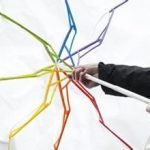 Ribs and Stretchers
Ribs run underneath the canopy of the umbrella and stretchers join the ribs with the shaft of the umbrella. They are assembled methodically to give “U” shape to the ribs and are usually made of steel or some other such metal.

The ribs and stretchers are interconnected with a joiner, which is usually a small jointed metal hinge. When the umbrella is opened or closed, the joiner opens or closes simultaneously through an angle of more than 90 degrees. Then there are two catch springs in the shaft of each umbrella. 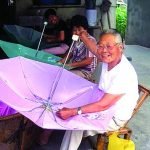 Canopy
The canopy of the umbrella is hand sewn to the ribs in form of individual panels. The canopy cannot be cut from one piece of cloth because each panel has to be shaped according to the curve of the canopy by making the panels follow the thread pattern of the weave, otherwise, the material will pull on the bias and create puckers.

Each panel is cut separately from piles of materials called gores. Machine cutting of several layers at once is also possible which is less cumbersome. The standard rain umbrella has eight panels. However, there can be six panels in smaller umbrellas such as parasols and children’s umbrellas. The larger umbrellas can have as many as twelve panels too.

A metal ferrule may or may not be forced over and glued to the tip of the umbrella that passes through the canopy. The handle made of wood, plastic, metal, or any other material is fixed at the end of the shaft with the help of screw or glue.

The end tips of the cover where the ribs reach past the canopy may be left without any covering or may be covered with small plastic or wood end caps that are either pushed or screwed on, or glued, and then sewn to the ends of the ribs through small holes in the end caps. This completes the process of making an umbrella. 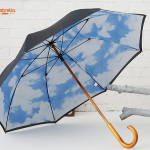 Variations of Umbrella
The above-described process is typically followed for making a stick umbrella. There are collapsible rain umbrellas too, which are mechanically more complicated than stick umbrellas, although they are made through the same basic technology.

The difference between the two is that while making a collapsible umbrella a two piece shaft that telescopes into itself are used. Apart from this, an extra set of runners along the top of the umbrella is also provided.

When buying an umbrella one should look for the comfort of the handle, the ease with which the umbrella is opened and closed, and the closeness with which the canopy segments are connected to the ribs.

Cutting the suitable size of the fabric is the very beginning process which is called “Large Cut”, sometimes called “First Cut.” Use of machine or hand-cutting to cut fabric in rectangle shape from a pile of fabric.  This process is the pre-stage for the second cut.

In this case, we use silkscreen printing as an example (For detail, please go to the “Printing Method” section). Place the gores on a long table.  Then put the wooden flame on each gore and printing the graphic on the fabric.

After the printed gores are ready.  The next process is the canopy assembly.  In a normal umbrella, we sew 8 pieces of gores by the sewing machine to make the canopy.

The tip is a piece of metal or plastic stick at the end of each rib to stable the canopy with the ribs.  In this process,  we use a special sewing machine to sew the tips on the fabric.  The number of installed tips is the same as a number of ribs.

Join the frame and canopy:

The next process is to sew the canopy with each rib. This process can not use a machine,  it is totally hand-assembly.

There are several methods to install the handle with the shaft such as screwed on, heat up shaft or glue to secure the handle.

Quality Control is the most important area of each process. Therefore we appointed QC staff in each production line in each process.  After all, assemble and production process finished, all the umbrella will send to the quality control department to have the final quality checking process before packaging.

All umbrellas which passed the QC test will send to the packaging department to pack into the carton.  Normally, there are 5 inner cartons in each outer carton.  Each inner carton contains 60 pieces of umbrellas.